Despite The Odds, This Team Won’t Back Down

In the middle of the second lockdown in Melbourne, Ray White Oakleigh | Clayton have managed to achieve a 100 per cent clearance rate.

Despite the odds, this powerhouse office sold nine from nine under the hammer recently under their innovative new online auction conditions.

The boss at Oakleigh | Clayton is adamant they will not backing down from auctions.

“In fact we are going for more than ever before. The online auction process is working so seamlessly. We are running between five to 10 every single week,” said Chris Kelepouris, CEO and Founder of Ray White Oakleigh | Clayton.

“I think our key to success is that we practice consistency; we know what works and we nail the basics.

“We put a lot of emphasis on getting the process right; we are adapting but not straying away from the processes we have always used.

“Through this tough time, the team’s attitudes have been amazing – the team has been really wonderful in helping each other stay pepped up, and getting each other through a stressful period.

“Teamwork and process is the winning combination for our office.” The auction saw more than 100 bids lobbed online from the 11 registered bidders.

“This success for our vendor today is a result of every single agent in our office taking a buyer through this home; there was at least one buyer every day inspecting it and resulting in over 68 inspections,” Mr Midas said.

“The offers we had prior to auction were all around the $820,000-$850,000 mark, so you can imagine how thrilled our vendors are that we chose the auction method and achieved over $1.2 million.”

The beautiful maintained home was built in 1969 and had never been sold before. It is an original home with no updates but it was built well ahead of its time and with extreme care and love.

“When we first met with the brother and sister vendors, who grew up in this house, they showed us architecture plans of the property framed and put at the entry of the home; all the buyers loved that! The italian owners took better care of the house than most people do their kids!” Mr Midas laughed.

In the end, the buyers were a young family wanting to get into the area, and who were referred from another agent in the Oakleigh office.

“A crowd gathered outside our office because they couldn’t believe how much the property sold for. The buzz from our auction room today was palpable.” In another huge sale from Ray White Oakleigh on Saturday, Agents Jonathon Eaves and Tom Carroll saw their listing at 47 Moorookyle Avenue, Hughesdale go under the hammer for $1.56 million, a huge $160,000 over reserve.

“We had two strong bidders, which is all you need to achieve a fantastic result. Because we met both of these buyers in week one, it was a hard task to keep them interested for four weeks, but we are very glad we pushed through to auction day.”

“We have competitors who have been switching to private sales during this further lockdown in Melbourne, but we have faith in the auction process.”

Mr Eaves said that the home was a very solid family space, with separate entrance to the house for a home office / study area.

“Buyers are paying more for that extra office space in the home, with the trend towards working from home now. There is also an opportunity to convert the self contained office space into an AirBnb type space, for those wanting extra cash during a harder economic period.” “We had a whopping 23 registered bidders today, and throughout the campaign had interest from a huge mix of people; first home buyers, downsizers, investors,” Mr Renzella said.

The winning bidders in the end, were a downsizing couple from Sunshine and were looking for about four months before finding the perfect apartment to move close to their daughter.

“The vendors were crying – we had a tv set up for them to watch the online auction take place. They were really thrilled and overwhelmed with emotion at the result. I am looking forward to helping them find their next home for their next chapter.” 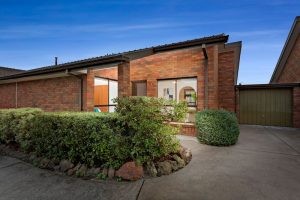 Back to all news
Up to Date